How many of his own voters does a maskless, crowded, shoutfest called a Trump rally sicken or even kill?

Trump had large rally in Moon Township, Allegheny County, Pennsylvania on 9/22. I don't have numbers; no news outlet made any estimates. Saw some photos and I'd guess maybe around 5,000 (unless the crowd was photoshopped as the famous Inauguration photos were).

Allegheny County has had fairly low spread since March.  We've usually been a "yellow" county; we were briefly "orange" after the bars were opened up more in July, but the spread has decreased some since then  when bar hours were restricted again.

Moon Township is in the Western central part of Allegheny County and is home to the Pittsburgh International Airport.  It tends to vote red, but just barely.  I worked in a Moon county district for 3 elections including 2016.  While the red candidates usually won, they never won by much.  Amazingly in 2016, both Hillary Clinton and Katie McGinty won by a few votes in that district, but lost at the state level (though not by much).  Location of Moon Township: 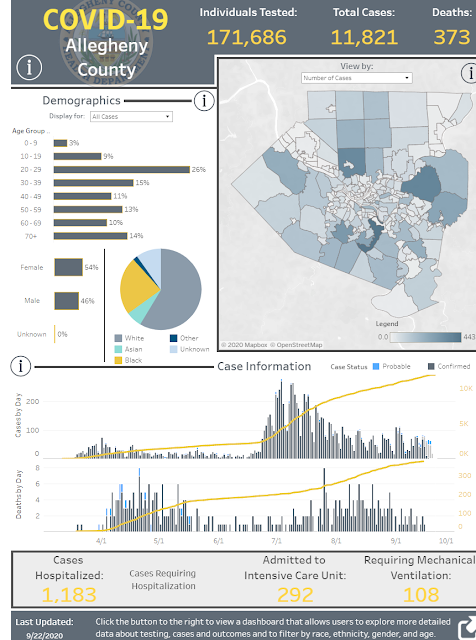 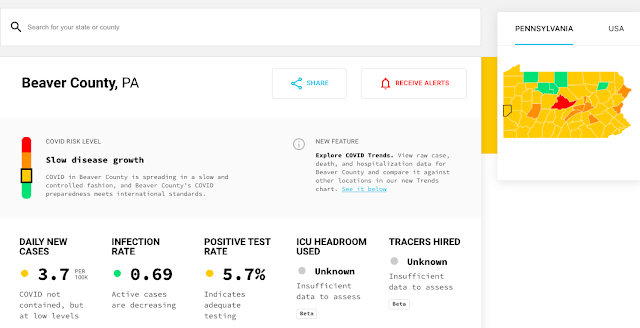 At least once a week over the next few weeks, I'll update COVID county case information to see how many people Trump has made sick as a result of his 9/22 rally in Moon Township.
But I wondered - is there a pattern for counties to have a higher-than-average COVID-19 spread?
Here's a Johns Hopkins University map from 9/24, showing the COVID-19 spread in counties in southwestern Pennsylvania, eastern Ohio, the panhandle of West Virginia and a bit of northwestern Maryland. The one dark-colored county indicating higher COVID-19 spread is Columbiana County in Ohio south of Youngstown. Interestingly, Pence spoke in Columbiana County 3 weeks ago (September 4).
The dark-ish county northwest of Allegheny County, adjacent to Columbiana County, is Beaver County. Beaver is very close to Moon Township (where Trump spoke on 9/22). Trump has spoken there a few times, but not since last June. However...when VP Pence went to Ohio on 9/4, he also stopped in Beaver County the same day. Not that you see masks at Pence rallies either.
So it will be interesting to see whether the COVID-19 rates start to go up in Allegheny County, in Washington County (which is also quite close to Moon Township), in the WV panhandle (Weirton area), and in an eastern Ohio like Jefferson County in the weeks following the maskless, loud Trump rally in Moon Township on 9/22.
Posted by Laurie Mann at 11:58 AM 0 comments

You've Got to Be Carefully Taught...

I wrote this in response to a provocative photo of black children being taught to hate police on another person's Facebook page. While I wrote this as a fact-check, it can come off as politicking in someone else's living room, which I should not have done.

What Republicans Seem to Believe... 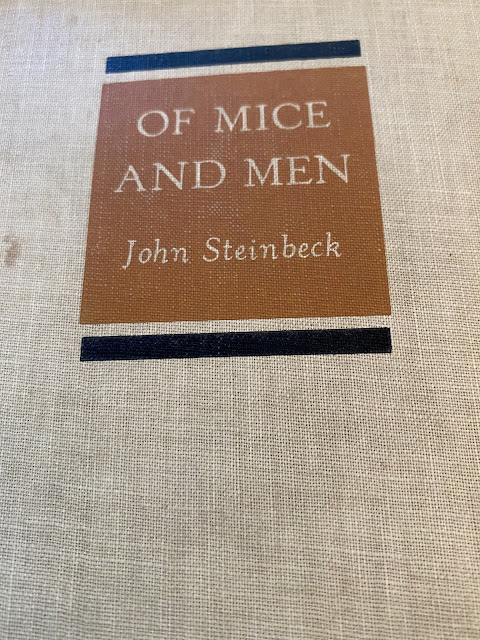 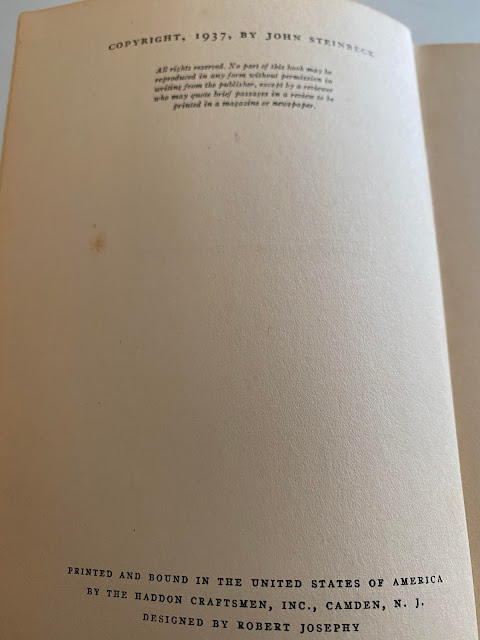 Sometimes, the books are neither SF nor fantasy but are uncommon.  This is a first edition of Of Mice and Men, published in 1937 by Covici Friede Publishers.
Good condition - $30 + $8 shipping.
Interested in buying?  Email  Laurie Mann
Posted by Laurie Mann at 3:45 PM 0 comments

Today is a day of action to support the United States Post Office.  Here are some of the things you can do to support this:  https://www.savethepostoffice.net/survey/save-the-post-office-remote-options/?

Someone on Twitter kindly posted the email addresses of the USPS Board of Governors.  I CC'd Louis DeJoy himself.   If you are staying in and can't protest at a post office, at least take a few minutes and write a letter to the Board of Governors: 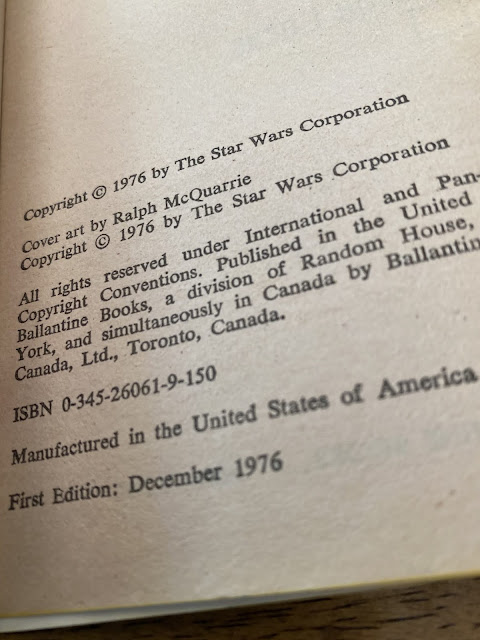 Yes, this is the same title on sale now for well over $700 on AbeBooks.
It's been read, it's in good condition, no one (not even Alan Dean Foster) has autographed it.
Price: $200  (+ postage, estimated at $5)
Free delivery within 25 miles of McDonald, PA.
Interested in buying?  Email  Laurie Mann
Posted by Laurie Mann at 2:52 PM 0 comments

Barry Hughart's Bridge of Birds: A Novel of an Ancient China That Never Was 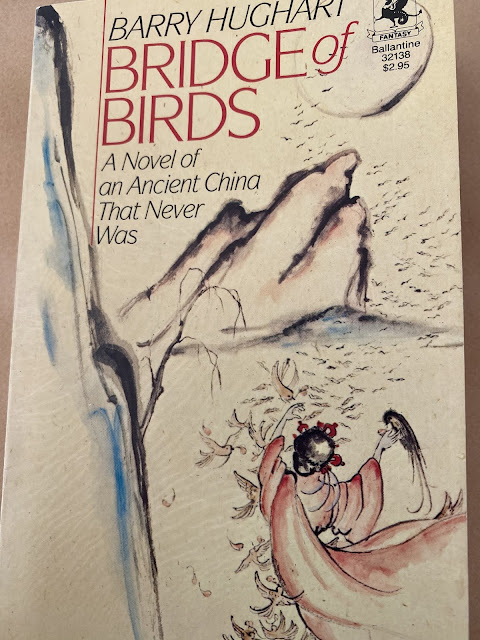 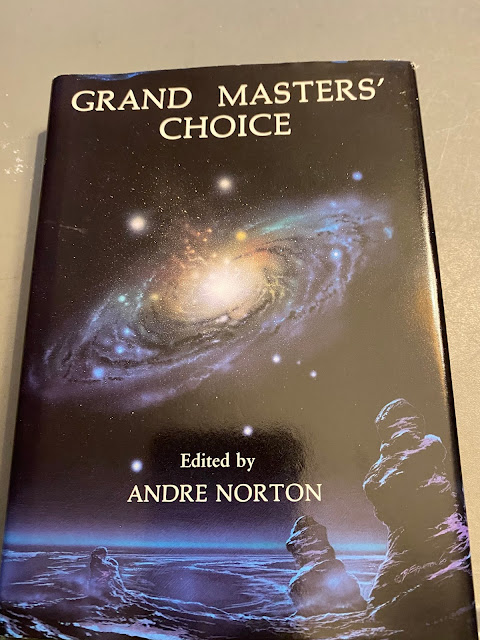 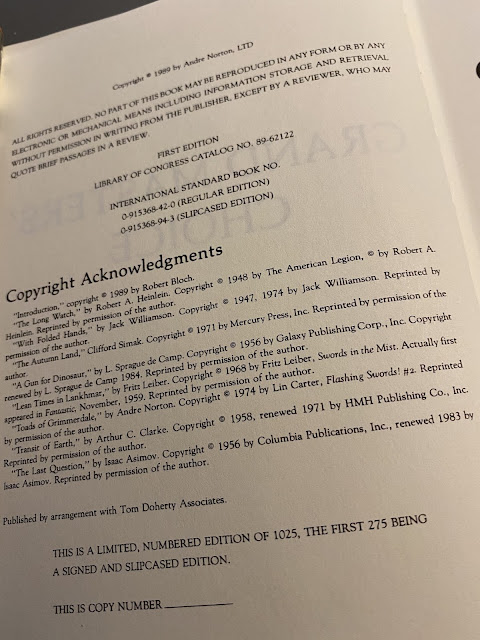 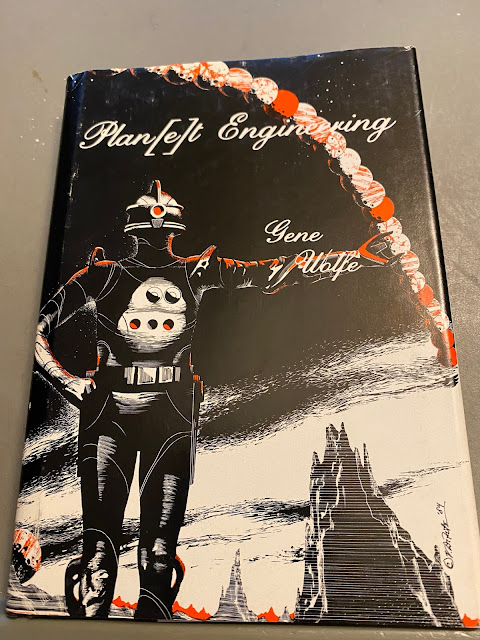 After many decades of collecting, we're working to downsize.

I will be selling some rare books. These items include out-of-print books like Gene Wolfe's Plan[e]t Engineering & Andre Norton's Grand Master's Choice (both in very good condition). Will also be selling some rare old mysteries from my father's estate, which include some Dell "Mapback" books.  And, when I can find it, a first edition of The Adventures of Baron von Munchausen.

I was going to do this on eBay, but eBay requires that I give them my phone number which I will not do. I took down an account I created in about 10 minutes. Instead, I'll do it through this blog.

Books for sale include (so far):

If you live in the Pittsburgh area, you can pick up some things for free:

Drop me a note if you're interested in anything.

When You Refuse to Hire Experts...

Here is what happens when you need an expert to do something and refuse to hire an expert and instead hire someone you go golfing with who'll do the job cheap. 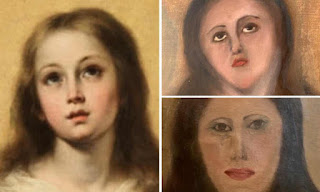 That describes everything that's gone wrong in our country over the last 3 years.
The painting on the left was the original work, the "restoration" on the right was committed by a non-expert in Spain. https://www.theguardian.com/artanddesign/2020/jun/22/experts-call-for-regulation-after-latest-botched-art-restoration-in-spain?CMP=share_btn_twhttps%3A%2F%2Fwww.theguardian.com%2Fartanddesign%2F2020%2Fjun%2F22%2Fexperts-call-for-regulation-after-latest-botched-art-restoration-in-spain%3FCMP%3Dshare_btn_tw
Posted by Laurie Mann at 12:16 PM 0 comments

The #TrumpTulsaRally teen TikTok ticket hack was the BEST combination of punking and a peaceful protest of the #TrumpRegime EVER! Way to go kids! 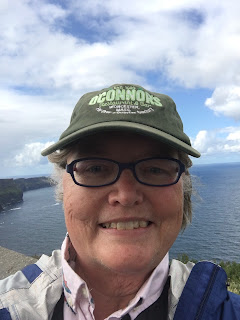 Taken in August 2019 in Ireland - the Cliffs of Mohar are in the background.
Posted by Laurie Mann at 6:42 AM 0 comments

So we have now followed our state's "Stay Home" order for 100 days.

Jim had worked from home for 14 years and had been planning to retire in mid-April 2020 anyway. I have not worked regularly in years. While I was hoping to be doing some extra work, with all productions shut down that wasn't going to happen.

So when it was clear we wouldn't be spending much time in public in the future, we made one last trip to Wahlburger's, went to the grocery store (which was a mob scene) and went home.

I woke up on Friday, March 13 with a severe headache and body aches. I crawled into my chair and watched TV. I took my temperature regularly and it didn't go anywhere so I doubted it was COVID19. Some friends had reported a similar flu a few weeks before, and people had gotten over it in about a week, which I did.

Over the next few weeks, we got used to shopping in the morning during "geezer hours," buying and cooking odd cuts of pork, and, by early April, figuring out how to jury-rig a facemask. I made some out of odd bits of cloth then figured out how to make some clingy-facemasks out of an old jersey. We have since been able to buy actual facemasks.

We basically did #StayHome, other than visiting our daughter, whose company wisely went to work-from-home mode. As the weather got more spring-like, we also started doing more hiking on the local trails. Between the Montour Trail and the Panhandle Trail, southwestern Pennsylvania has the longest rails-to-trails area in the country.

So now it's been 100 days. We wear masks in public, go out mostly to walk or for quick stops for groceries. We connect with people online and are busy with some volunteer activities. We lost one person from COVID-19 we knew slightly early in the pandemic, we know a few people who were sick and recovered.

We won't get to go on a long-planned trip to New Zealand. This is the second time we'd planned a trip to New Zealand that we had to cancel. The first time was in 2010. We were going to the Worldcon in Melbourne Australia and planned to visit New Zealand after the conference. We were planning to go to Christchurch, as it's near the part of NZ we particularly wanted to visit. But then the first Christcurch earthquake hit so we had to cancel that (not that spending more days in Australia was a chore!). Due to other plans we had tentatively made for 2021 (if travel is a possibility), we may never get to go to New Zealand.

Being baby boomers meant that COVID-19 is our first experience with anything approaching a quarantine. Compared to the very restrictive quarantines in some places during the 1918-1919 flu pandemic, we really don't have it that bad. We can leave our house without being arrested so long as we wear our masks. From studying disease spread during earlier epidemics, staying home more and using masks matters.

I had all the usual kid diseases that kids had before the MMR, chicken pox and flu vaccines. Between November 1962 and April 1964, I was sick frequently. I had four stays in the hospital - three times with nephritis (a reoccuring kidney infection) and once with tonsilitis. But in that same period, I also had rubella, chicken pox and at least one severe case of the flu. Spent the rest of my childhood and adolescence being pretty healthy, and much as I hated getting shots, I realized the new vaccines that came out in the '60s were good for me.

I don't really remember any big flu epidemics growing up. There had been a major flu epidemic in 1957, the winter I was born. In January 1971, there was something approaching a flu epidemic in our school. The absentee list went from its usual 1 sheet to 2 sheets for at least a week. No quanrantine though and the flu breakout in our area was gone by February.

Since 1976, there were more threats of flu - swine flu that year and various other diseases since then. SARS and MERS were both frightening but never really spread much in the US. Always felt fear of Ebola was utterly overblown unless you were a healthcare worker. Even the year H1N1 broke out, there was sometimes talk of quarantine, but nothing happened (though we had a young friend hospitalized with it for 5 weeks - luckily, he recovered).

I know, we're lucky. Retirement means if you've saved money and can be frugal, you can get through pandemics without much worry. Many people we know have been able to work from home, and more businesses are finally understanding that working from home can be a really good thing. Southwestern Pennsylvania has been a mostly low-spread area - we're back around .84% which is good. So we plan to mostly stay home for "the duration," where "the duration" is until there is a widespread, safe and effective COVID-19 vaccine. Much as the movie Contagion really captured what would happen if a highly contagious, more deadly flu spread around the world, it was overly fantastic about the speed in which a vaccine was developed. A COVID-19 vaccine probably isn't months away - it's likely years away.