My Year in Statistics and Life Facts

We've been parents for 36 years and Leslie finally moved into her own apartment.

I walked 1500 miles (1505 after First Night). Really. I'm particularly proud of that. I've been trying to break walking 1000 miles in a year since 2013 and I finally did it. "House walking" in cold weather has been very helpful. 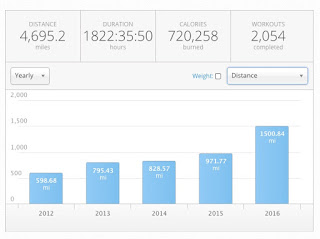 I lost 19 pounds. That's not a huge amount of weight, but for a post-menopausal woman who stress-eats (and this was an unbelievably stressful year), that's definitely in the right direction, even though I've gained and lost the same 5 pounds about 15 times since last June. Will go back to using the Always Hungry diet soon and hope to lose a little more weight.

I lost my mother, which made it a hard year, but I know I was lucky to have a mother until I was 59. My Aunt Jamen also died.

I lost some friends - David Hartwell, Morris Keesan, Kira Heston, Kate Yule. Also made it a tough year. And the parents of a number of friends died. We're just at that age.

Supported Hillary Clinton and am still a strong supporter of Democratic policies. While I accept the fact that Trump will be our next president, I do not believe he is capable of being president and expect he'll do something impeachable very quickly.

Continued to be the curator for Dead People Server, which was a little tougher this year as so many celebs I liked, like Alan Rickman, David Bowie, Carrie Fisher, Patty Duke, Bill Nunn, Gwenn Ifill died youngish.

I edited the MidAmeriCon II newsletter

Worked on the Nebula Award Weekend which will be in Pittsburgh next May and the Smofcon bid for Boston in 2017 (which won).

Continued to volunteer for Global Links.

Worked a few days as an extra, mostly for Outsiders season 2 which will have its season premiere on WGN starting on Tuesday, January 24.

Spent 7 days as security for the U.S. Open in Oakmont. Kind of fun, lovely weather, got to tell a bunch of people working for Fox Sports "Walk to your left!"

Traveled a lot, mostly between Pittsburgh and Massachusetts (many family trips this year), but also to Kansas City twice, Chicago, DC and North Carolina. Planned trips to New York City and Italy for 2017.

I broke a tooth and finally had the rest of it extracted almost 6 months later.

Still have fairly severe insomnia, but I think I'm finally back over 5 hours of sleep a night after sleeping less than that for much of the year.

Carrie Fisher, Patty Duke and Me

I never met these two famous women in my title. However, I really knew both of these talented women better than most.

I absolutely idolized The Patty Duke Show when I was 6. I had an on-going fight with my mother for months as she felt it was on too late for me to see. I think eventually Mom relented as I know I saw most of the shows over the three year run of the show and the afternoon reruns that followed. Patty Duke was very talented, playing two (and sometimes three) characters every week. And around that time I caught The Miracle Worker on TV and was even more impressed, Patty Duke playing a famous person (Helen Keller) I'd also idolized. She could do anything.

I was also aware of Carrie Fisher as a very young child. She was about my age and her mother was a lot like my mother - blonde, perky, a singer. As I learned later, her mother, Debbie Reynolds, had very similar views about sex as my mother had. In the mid-70s, I read a book called The First Time, where celebrities talked about sex and their first time. Debbie Reynolds talked a lot about the importance of pre-marital virginity, how she hoped her daughter would stay a virgin until her marriage, and I nodded a lot as I'd heard that talk quite often, though my mother always concluded that talk with "If you can't be good, be careful." I'm not sure that I ever told my mother "But I am good...and careful" once Jim and I started dating, but...

Carrie Fisher literally burst on the screen in Star Wars which quickly surpassed Jaws, The Sound of Music and Gone with the Wind as the biggest grossing movie ever. I thought she was terrific (though her wavering accent bothered me a bit). She was a strong hero in an adventure movie at a time it was utterly unknown for a woman to do that. She withstood both Imperial torture and helped get "our heroes" out of the prison. After The Empire Strikes Back there were constant arguments about who "The Other" Yoda references could be. I argued for three solid years that it had to be Princess Leia, while many people disagreed with that. I got to say "I told you so" a lot after The Empire Strikes Back came out.

On December 19, I was driving up to Massachusetts and brought Carrie Fisher along with me. I'd gotten the audio book of Princess Diarist and was reliving the spring of 1976 through Carrie Fisher's voice. She was in England making Star Wars and having her first serious affair...with Harrison Ford. Meanwhile, back in Pittsburgh at that time, I was a college freshman who'd fallen for Jim and was doing many of the same things she was doing when she wasn't on set (except for smoking pot as I'd learned in high school it did nothing for me but trigger an asthma attack). But Jim and I were still together 40 years later, and while she was at least still friends with Harrison Ford, her personal life had been radically different. She had many addictions and mental health issues, and my addictions were more for chocolate...and cheese...and champagne.

Patty Duke died fairly suddenly of a ruptured intestine in March at 69. Carrie Fisher died four days after an apparent heart attack (or sleep apnea & other factors) this month at 60. I was very much saddened by both women's deaths, as I'd hoped they'd be out and about for years ago come.

What the three of us had in common in spades was manic-depression.

Back in high school in the early 70s, there were a bunch of books about mentally ill teenaged girls (I think it was always girls, I don't think boys, no matter how outrageous their behavior, were ever considered mentally ill). I'd read I Never Promised You a Rose Garden, about a teenaged girl with schizophrenia. I was fascinated by it but I didn't really relate to it. About the same time, I read Lisa, Bright and Dark, about a teenaged girl with manic-depression, and I related to it instantly. That explained so much, the periods of black depression, the bad temper, the very fast talking, the multiple suicide attempts, the feeling of never feeling worthwhile at times, while, at other times, I felt like I could do anything and I was being cheated.

For me, generally, the manic periods were great - I'd get an enormous amount of work done in a very short period of time, but there were times when it did lead to stupid and reckless behavior. The depressive periods were utterly miserable. But I was generally very functional; while I had therapy on and off for a long time and took Prozac on and off, I generally had enough control over myself that I never needed to be hospitalized. My last serious depression ended in 2004, about a year and a half after developing insomnia (the only good part about insomnia, which I still struggle with).

I can't begin to say how much I appreciated both Patty Duke and later Carrie Fisher helping to take mood disorders of all kinds out of the closet. I will miss the courage of both of these women. They will continue to be my role models going forward.


After Carrie's autopsy report was issued in June 2017, her daughter Billie Lourd wrote the following: 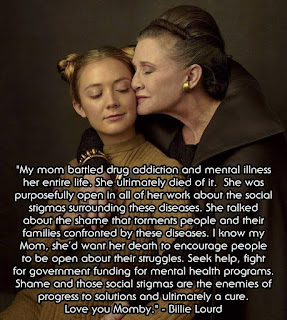 Carrie Fisher must have been a great Mom to have a daughter as young and wise as Billie Lourd.

Related blog post: "Honeymooning with Wookiees - A Star Wars Story (sort of)"
Posted by Laurie Mann at 11:10 AM 0 comments