I periodically take Twitter vacations so if you look up @lauriedtmann on Twitter and I seem to be gone, I'm likely to be back in a couple of weeks.

When it first got going, I was one of the "What's the point of Twitter?" people, even though I joined in 2008. But, gradually, I found it more interesting, and, since late 2012, have been an avid participant.

I like real followers. I regularly purge bots and inactive followers except for a few friends who like to read but not participate.

I was delighted when Twitter finally started to deal with its bot problems.  On 2/20/2018, they started to delete accounts from bot farms.  The grief the far right expressed over losing their bots was very funny.  Thank-you, Twitter, it was a start. Hope you continue to boot the bots. Sadly, they don't seem to be deleting bots very often. Maybe they got too many complaints from Republicans, who have been the big beneficiaries of bot farms.

There aren't reliable tools for finding bots unless you have their IP addresses (which Twitter does).  There are some tools you can use once or twice but then they demand payments.  Twitter was getting better at identifying/purging certain kinds of spambots, like these:


I do not intend to share pic on Twitter however you can add my snapchat: XXXX so I am able to send you my pictures etc.

While pro-Republican bots are easier to identify, there are pro-Democratic bots as well, and I'll block them as readily as any other bots.  There are some people who are trying so hard to conceal their identities so their accounts look like bot accounts.  When I see an account with a string of numbers in its account name, I almost always block it as a possible bot.   So if you're a real person but I've blocked you anyway, that's why - your account looks too much like a bot account.

If you add me to a list, or if you reply to a LOT of people in the same tweet and you copy me, I will block you.

I'm not the kind to follow back everyone. I don't follow and I always block any of the following kinds of accounts as they are likely bot accounts 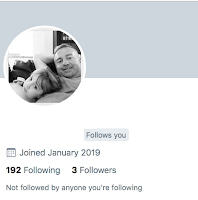 While I'm very active on #resistance and #uniteblue, I don't automatically follow-back because some people who are members of  #resistance or #uniteblue fall under one of the above categories.  And, like everywhere else, some of those accounts are also bots.

I also think demanding a follow back or visiting a link is silly. I appreciate follow backs but don't demand them. I might be too outspoken for many and that's fine.

Basically, when I run into people I'd rather not follow, I #blockandmoveon. If they're overly abusive, commercial, or pornographic, I also report them to Twitter.

I do not read DMs. They are a horrific waste of time. With only a few exceptions, they've been spam from a Twitter app or harassment.

I'm glad there are now tools to make blocking abuse accounts much easier. If you're interested in learning more about blocking sock puppets, visit BlockTogether. You can create block lists and share them if you'd like to. If you got ensnared in the whole #GamerGate mess, follow GGAutoBlocker on Twitter.  Twitter Audit will tell you how many bots are following you for free, but you have to pay to find out which accounts are bots.  @BotSentinel is a useful account to follow if you want information about political bots on Twitter.

I had high hopes for botcheck.me, but it really isn't reliable yet.  Ditto Botometer (formerly bot or not)  Damn!  Twitter has killed some bots but not all of them.
Posted by Laurie Mann at 9:47 AM 1 comments

Who Voted in the Senate to Protect Military Rapists?

There has been an epidemic of reported rapes in the military over the last few years. So what does the Senate Armed Services Committee decide to do?

I'm particularly disappointed by Claire McCaskill's vote. She, sometimes, pretended to be a progressive (certainly compared to Todd Akin, she was). But she's a woman with half a brain in her head part of the time, and yet she voted to continue to shield military rapists. SHAME!

Twitter list, many of the same people who voted against the Violence Against Women Act and Gun Background Checks:

On Mother's Day, I stumbled over a lovely essay by one of the Newtown Mothers...and it made me want to remember each of the kids. I would be especially angry if I were a Newtown mother, on Mother's Day. These kids should all still be with their parents and their schools. So, I tweeted about each of the kids in honor of Father's Day. Here's what I said:


Never forget that these were the senators who cared more about the NRA's opinion of them than the 90% of the public who wants better background checks. Here are the Twitter accounts of these senators: